The educational environment can play a crucial role in the ability of its students to retain information. Schools strive to provide the best classrooms possible by introducing new strategies. Active learning opportunities can provide students with a more hands-on learning approach. New technology has continued to develop to better engage students in place of traditional methods. The curriculum itself is constantly being updated to better reflect student needs. While these changes can produce great results, poor acoustics could still prohibit these tools from being effective. If students have difficulty hearing the teacher and each other clearly or if they are distracted by external noises, it can impact their learning experience.

The National Center for Education Statistics (NCES) conducted a study on the condition of public-school facilities in the 2012-13 school year by sending a survey to district-level personnel who were very familiar with the school facilities to the districts of approximately 1,800 public schools in the 50 states and the District of Colombia. To give further reference, 99% of the survey respondents claimed to have permanent academic buildings and 31% had portable buildings that could be moved when necessary. The table below (Table 1) was taken directly from the NCES report, available in the public domain. The table shows the percent of public schools that rated different categories as “unsatisfactory” or “very unsatisfactory”. 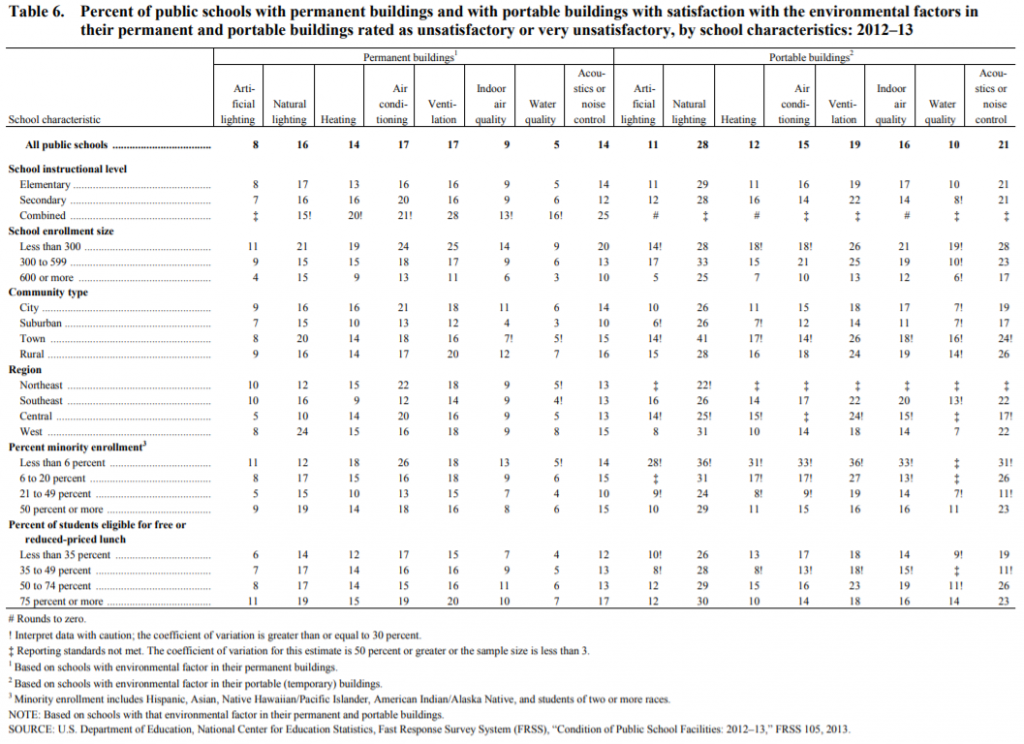 Table 1 Percent of public schools with permanent buildings and with portable buildings that rate environmental factors as unsatisfactory or very unsatisfactory, by school characteristics: 2012-13

As can be seen in the table, 14% of permanent public schools and 21% of portable public schools rated acoustics or noise control as “unsatisfactory” or “very unsatisfactory”. These numbers may initially seem low, but they actually reveal a significant problem. If this survey truly represents the rest of the country, this implies that at least 7.1 million students are affected, considering there are 50.7 million elementary and secondary public-school students in the United States in 2018 according to NCES. This number is obviously significant, especially considering how important a good acoustic environment is for learning.

The above report also only considers individuals that have noticeable issues with acoustics. At times, the acoustical environment may not directly impede learning, but it could cause students to become fatigued at a much faster rate due to the constant processing of extra noise. Either way, poor acoustics are actively affecting millions of student across the United States each year.

The American National Standards Institute (ANSI) has created a set of standards to be used when constructing and renovating any academic space. While these standards don’t necessarily address all the possible issues that could exist in a classroom, they provide a great starting point and can help guide the process of treating the room.

In order to discuss the standards, it is necessary to first define several terms that are used throughout. According to the ANSI, a core learning space is intended for educational activities where the primary functions are teaching and learning and where good speech communication is critical to a student’s academic achievement. Ancillary learning spaces are spaces where good communication in a more informal and interactive environment is important to a student’s educational progress. All of the sound levels listed are A-weighted sound levels, which roughly approximate how the human ear hears different frequency components of sound at typical listening levels for speech.

The other focus of the ANSI standards regarding permanent schools refers to sound isolation design requirements. Sound isolation is the property of blocking off outside noise from a space and vice versa. Isolation is usually achieved by increasing the mass of the structure itself and/or decoupling the structure from the rest of the building. Decoupling a room involves the incorporation of products like springs, channels and other resilient products that don’t transfer sound waves through the structure itself. Due to these solutions, most of these standards must be met when constructing the school, as it is extremely difficult to isolate a space without properly constructing the room in the first place. Tables 3 and 4 below show the Outdoor-Indoor Transmission Class (OITC) rating and Sound Transmission Class (STC) rating for different walls. The OITC rating is designed to measure the transmission of street sounds through exterior walls, windows, and façade elements, while the STC rating is used to evaluate transmission through several different types of barriers.

Haverstick Designs uses both the STC ratings along with the general Transmission Loss (TL), or the measurement of the volume (dB) difference on either side of the wall, in order to recommend the best treatment for each project. We focus largely on the TL values since they are frequency dependent, unlike STC which is a single number rating. It can be difficult to understand and implement these standards, but an Acoustical Consultant like Haverstick Designs or others will be able to help guide the project and ensure that each classroom meets the standards that have been outlined here.

Common Acoustical Problems and Solutions in the Classroom

Although evidence shows that poor acoustics can often be a problem in the classroom, existing problems and their solutions may not always be immediately obvious. In order to discuss these issues in further detail, it is easier to first discuss the basic qualities of a good acoustical environment. A room that has been properly treated should have adequate loudness, a relatively uniform sound level, low background noise levels, an appropriate reverberation time, and no acoustical defects. Each of these characteristics work in unison to create a learning environment that allows speech to be heard clearly.

Reverberation Time (RT) can either tremendously help or hurt the acoustical performance of a room. Reverberation time is defined as the time required for the level of a steady sound to decay by 60 dB after it has been turned off. Generally, the more that speech is the primary use of the room, the lower the ideal reverberation time should be. When considering what happens to sound at longer reverberation times, this makes logical sense. Words tend to overlap each other, and the lower vowel tones can cover the higher frequencies of the consonants, causing the speech to sound muffled and jumbled. Rooms used for musical applications tend to benefit from a longer reverberation time, adding warmth and presence to the music.

The figure below (Figure 1) shows the ideal reverberation time for different room volumes and applications. Larger rooms used for music applications require a much longer reverberation time than the smaller, more speech-focused rooms. The line for lecture halls, which is shown towards the bottom left of the figure, generally coincides with the standards outlined by the ANSI in Table 2 above. The figure only refers to the ideal reverb time for frequencies from around 500 to 1000 Hz. Like sound isolation, reverberation time can vary drastically across the entire frequency spectrum. It is fairly common that there could be a significant issue with excessive reverberation in lower frequencies while higher frequencies attenuate at a much faster rate. This is why proper selection of acoustical treatment is needed to bring balance to the RT values. 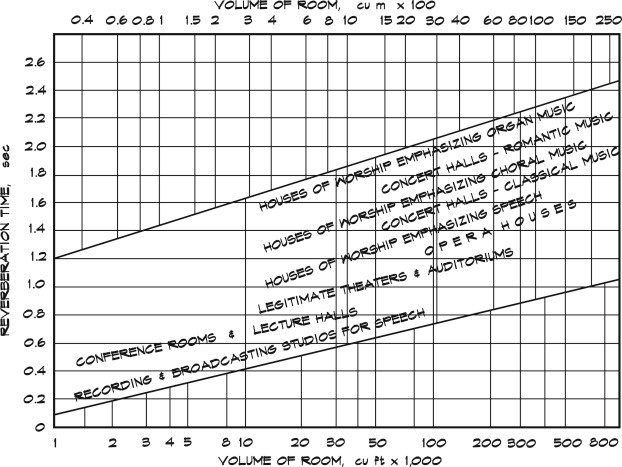 While addressing a room’s reverberation is a great first step, other factors such as background noise levels can prevent the wanted speech clarity. Background noise refers to any unwanted sound that can be heard besides the main sound source. It can include factors such as HVAC noise, electrical noise, traffic and airplanes, and even extraneous speech. Not only can these sources increase the overall sound level of the room, but distinct noises can also be extremely distracting. The ANSI has already placed fairly specific standards regarding background noise since it is usually fairly easy to measure.

Both the reverberation time and background noise have standards set in place by the ANSI as shown above. However, simply following these standards does not ensure that all acoustic issues will 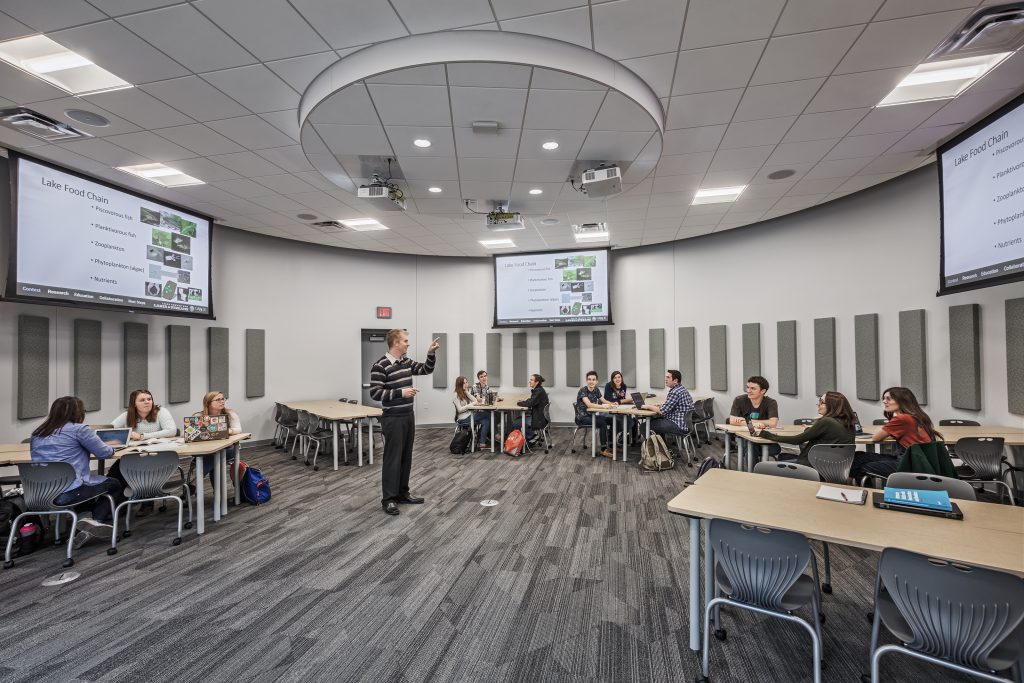 be fixed. For example, the presence of acoustical defects can also contribute to poor intelligibility and general discomfort in rooms. Two of these defects include focusing and distinct echoes. Focusing occurs when multiple reflections are directed towards the same area in a room. This usually happens due to the presence of a concave surface, which causes sound at the curve’s center to be much louder than the surrounding areas because of the reflection summation. Haverstick Designs has actually worked with a completely circular classroom at Grace College that had this exact issue. You can read more about the project here.

Distinct echoes can persist even when the reverberation is controlled adequately. “Slapback” echoes occur when a reflection of sufficient loudness travels from a reflective surface and arrives significantly later than the direct sound field. This effect can impact both the speaker and students that sit towards the front of the room. Another type of echo called the “flutter echo” occurs due to multiple reflections between parallel planes. This effect is often described as sounding like a ping pong ball bouncing quickly back and forth.  Both distinct echoes and flutter echoes are extremely distracting, which can be especially frustrating for listeners and presenters.

Speech Transmission Index (STI) is a metric based on the speech level, frequency response of public address system, background noise level, echoes, and the reverberation time. The STI measurement is on a scale from a completely unintelligible sound at 0 to a perfectly intelligible sound at 1. The results are plotted on a perception scale as shown below in Figure 2. The STI shouldn’t fall below 0.7 for classrooms.

Some general room design characteristics that could help room acoustics include acoustically rated ceiling tiles, carpeted aisles, automatic door closures, angled walls of at least 6 degrees, padded seats, and appropriately placed absorptive panels. These panels are usually applied to rear and side walls of the room to control reverberation and lateral reflections, but Haverstick Designs will provide recommendations tailored specifically for each project. Every room has a different acoustical signature and unique problems and therefore requires a solution that has been specifically created with the space and application in mind.

Acoustics is often one of the factors that is ignored when constructing new classrooms. While it is still important to create designs that are creative and engaging for students, a poor acoustical environment could easily inhibit the space from maximizing the effectiveness of these strategies. With the various acoustical materials available today, sound quality does not have to come at the sacrifice of aesthetics.

As discussed above, organizations like the ANSI and the Acoustical Society of America have developed acoustical standards for classrooms. While these standards provide a great starting point for targets in Reverberation Time and background noise levels, each space will have problems that delve deeper than these standards, which can still cause issues in the room. Problems like unbalanced reverberation times, flutter echo, slapback echo, focusing, and speech intelligibility problems can still persist in a space that technically meets all ANSI standards. For this reason, it is important to involve an Acoustical Consultant on a project before these problems occur. Doing so not only can cut costs and optimize the process, but will ultimately result in a learning environment that is productive and engaging. 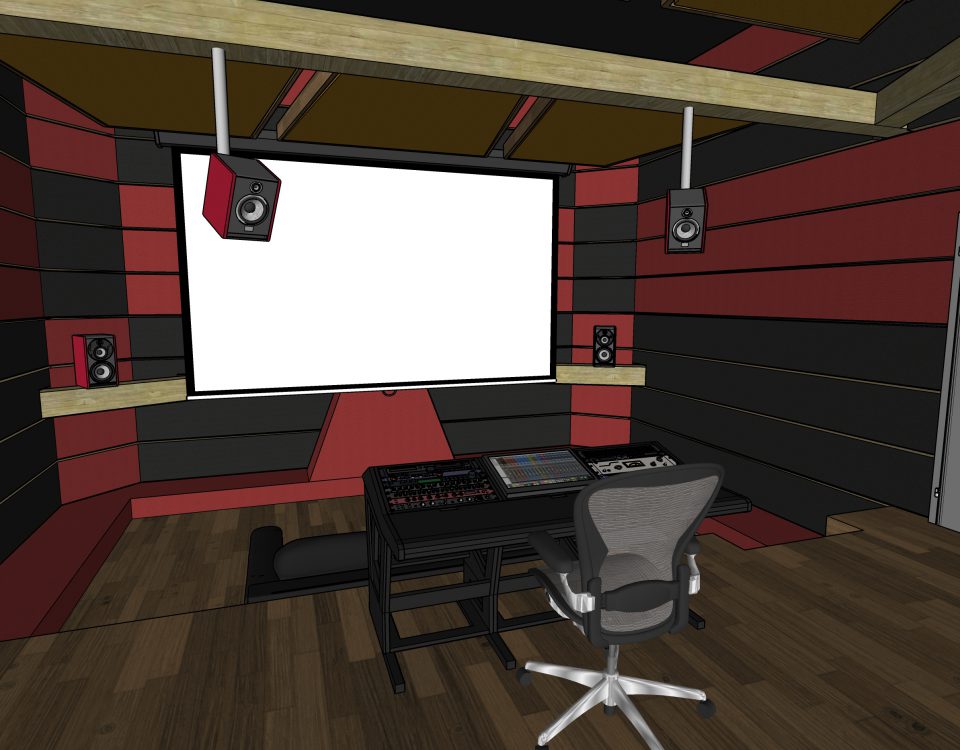 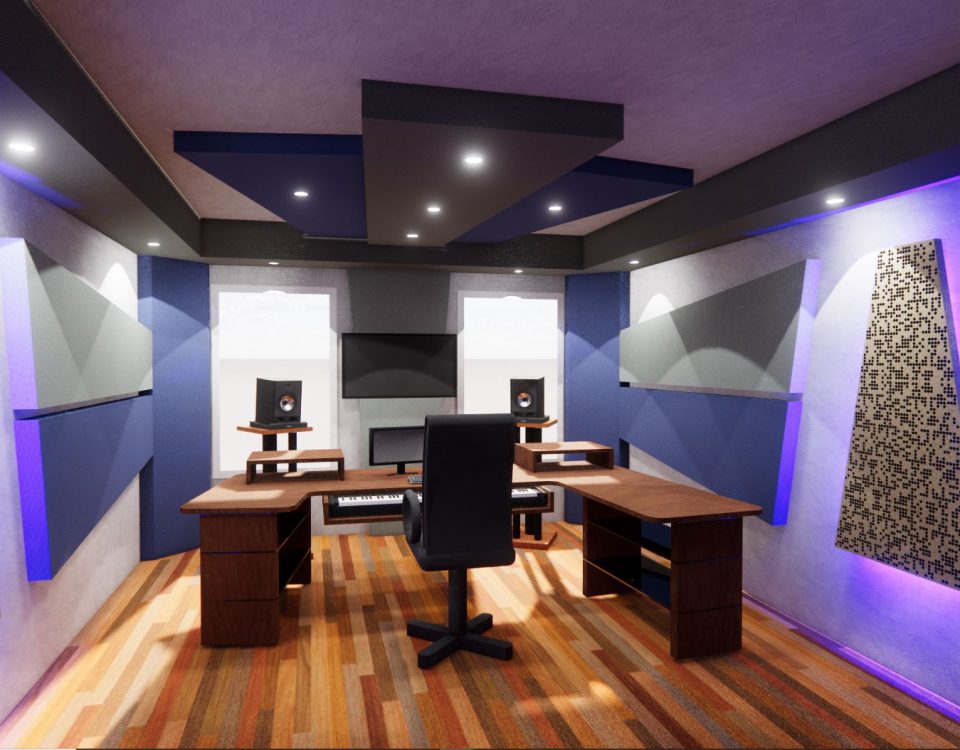